This isn’t so much a recipe as a method of preparing salad, but this has made it super easy to bring salad to work.  I’ve seen it all over the intarwebs and wanted to give it a try.  I made 5 jars worth and it stayed fresh throughout the week.  Note though that I did not add the dressing to the jars themselves, but kept it in little cups on the side.  But for a half an hour of effort (including making two kinds of dressing), we had salad for lunch for the week!  I did a Greek and an Asian variety, but the possibilities are pretty endless, and if you make your own dressing you can keep it pretty low cal. 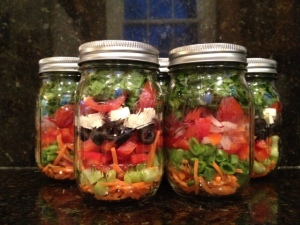 I used a little handheld chopper to shred the greens.  Definitely made it so I was able to add more, so chop your lettuces as finely as possible.  If you add tomatoes, seed them – the liquid in them will probably goop up the salad.