I’ve been working on cleaning out old cooking magazines that have now made 3 moves with me, tearing out pages of old magazines, etc.  I tear out the page and keep it, which is kind of silly since I access the recipe online in the kitchen when actually cooking!  This one came from an old Eating Well and it was worth a try – with good results, we thought.  I augmented with some traditional egg foo young recipes as far as seasonings, but did not modify the cooking method.  I served it with brown rice and some sugar snap peas and we would definitely make again.  A pretty quick no-fuss weeknight meal and good vegetarian option. 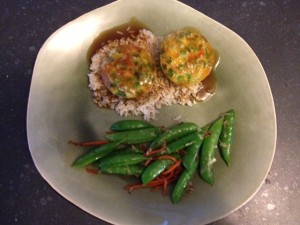 Whisk eggs and salt in a large bowl. Stir in peas, bean sprouts, scallions, ginger and carrots. Divide the mixture among the prepared muffin cups (scant 1/2 cup each).

Bake until the egg is cooked and beginning to brown,about 30 minutes. Run a knife around the edges to loosen.
Meanwhile, bring broth, mirin, soy sauce, white pepper and sriracha sauce to a boil in a small saucepan. Reduce heat to maintain a lively simmer and cook for 3 minutes. Combine cornstarch and water in a small bowl; whisk into the broth mixture. Cook, whisking, until thickened, about 1 minute. Remove from heat and cover to keep warm. Serve the sauce with the egg foo yong.

Mushrooms would also be good in this, but I didn’t have any fresh ones on hand, and was kind of late to re-hydrate the freeze-dried guys we had.  Bok choy would also make a nice addition or a nice side.

Lots of leftovers…makes 12 egg foo young’s (is that a plural?) and two is a pretty good dinner.  I made a bit of extra rice and sauce and it made for great lunches.  At about 300 calories for the entire thing (bit of rice included) it’s a great lunch, too.