We have endless cucumbers.  Endless.  Not joking.  No complaining, of course.  We went to visit Missy and John and they’d tried this Smitten Kitchen recipe and it was ridic…so it was clearly next on the list to get “rid” of the latest cucumber hoard.  I diverged from the recipe and added a lot of spices – these are pretty puckery even 6 hours later!  I imagine they’ll be awesome in a day or so! 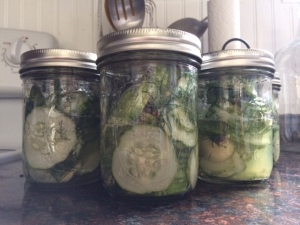 The above is written for a quart jar.  If you have pint jars (like me) cut this in half.  I did do 1/4 cup vinegar + a splash in each jar.  Remember that this is not shelf stable, so you can do to taste – these jars will last you about 3 weeks.

A mandolin makes this easier, but if you don’t have one, slice your cukes as thin as you can.  About 1/8-1/4 (I actually prefer 1/4).  Put them in the jars along with salt, dill, and whatever extra seasonings you like (I did all of them and the pickles 4 hours later are VERY spicy ;)).  Add the vinegar and shake to mix.

Put jars in fridge and shake every now and then to mix up.  They’re ready to eat in 2 hours, but the longer they go, the better they are!