This was another Cooking Light recipe that we picked for weeknight speediness, and thought it was a little so-so.  To be fair, I have never been great at cooking chicken breasts on a stovetop.  But it had potential, and I’m posting it because with leftovers the next day, I added a little bit of shredded cheddar cheese and it was suddenly much better!  I would probably still like this better if the chicken were grilled, so worth trying again next summer. 🙂 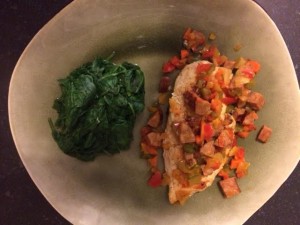 Heat a grill pan over medium-high heat. Sprinkle chicken with 1/4 teaspoon salt and pepper. Coat pan with cooking spray. Add chicken to pan; cook 6 minutes on each side or until done.