I found this recipe on the back of a chicken sausage package, believe it or not.  And it was REALLY awesome.  I wanted to eat the entire thing in one go.  I used a lot more sauce than it recommended, and it was homemade sauce from our own tomatoes last summer, but I think this would be awesome with sauce from a jar too.  Lots of veggies make it really great.  Definite make again. 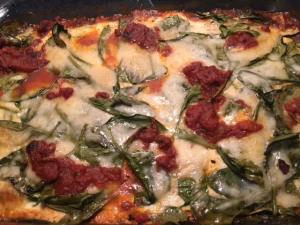 Sauté the garlic, onion, red pepper with olive oil for 2 – 3 minutes, add the sliced chicken sausage and brown for 3 – 4 minutes. Add the red wine, reduce over high heat, then add the tomato sauce, basil and oregano and simmer for 10 minutes. Preheat oven broiler to high.

Cover lasagna pan with a thin coat of sauce. Layer squash, then ricotta/egg mix, spinach, mozzarella then rest of sauce, squash, ricotta and top with the parmesan cheese.

Bake, foil covered 45 minutes with a layer of shredded parmesan cheese on top. Remove foil for another 15 min. Can cool and freeze.